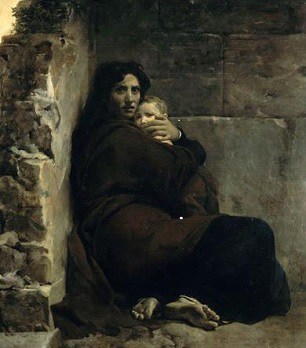 The light triumphs in the darkness

The Escape to Egypt

13 After they had left, an angel of the Lord appeared in a dream to Joseph and said, “Herod will be looking for the child in order to kill him. So get up, take the child and his mother and escape to Egypt, and stay there until I tell you to leave.”

14 Joseph got up, took the child and his mother, and left during the night for Egypt, 15 where he stayed until Herod died. This was done to make come true what the Lord had said through the prophet, “I called my Son out of Egypt.”

The Killing of the Children

16 When Herod realized that the visitors from the East had tricked him, he was furious. He gave orders to kill all the boys in Bethlehem and its neighborhood who were two years old and younger—this was done in accordance with what he had learned from the visitors about the time when the star had appeared.

17 In this way what the prophet Jeremiah had said came true:

18 “A sound is heard in Ramah,
the sound of bitter weeping.
Rachel is crying for her children;
she refuses to be comforted,
for they are dead.”

The Return from Egypt

22 But when Joseph heard that Archelaus had succeeded his father Herod as king of Judea, he was afraid to go there. He was given more instructions in a dream, so he went to the province of Galilee 23 and made his home in a town named Nazareth. And so what the prophets had said came true: “He will be called a Nazarene.”